World Sustainability Centre, Asfluitdijk.
Explanation
There are three main starting conditions:
- The design brief.
We have been asked to design a World Sustainability Centre. As such, this is a very ambitious concept.
- The site
This is a formless territory, of limitless horizons and a complete lack of scale. This is a vacuum without compromise. One of the few places in the world where there is no obvious starting condition that has later been tansformed: in other places the natural environment is an ecosystem that man has degraded, in this situation it was nature that caused immense catastrophies that changed the environmental conditions, and it is man that has fixed the conditions so as to break the destructive cycle.
- Us
¿What can we do? As Torres would say, "think - project - think". Search for that special thing that the brief hides, and generate an idea that allows us to act.
Considerations:
The programme: There is a need to be ambitious and ecological simultaneously. There are certain contradictions in this attitude that have to be addressed. This needs to be a large building, because its function is ambitious on a global scale, yet we must be sensitive with the existing landscape and with existing ecosystems.
The site: There is a need to act, but the conditions of the site should be maintained as intact as possible. Given that this place is almost the opposite of any other, so any action must be different, too. The project is to be located in a place that seems solitary, with immense horizons and great exposure, but within one of the most densely populated and highly urbanized countries in the world. Any project that reminds us of urbanized dutch conurbations would be a mistake.
The project needs to be radical, as radical as the afsluitdijk was when it was first imagined.
The concept needs to recognize the artificiality of the afsluitdijk and its surroundings, and try to strengthen it.
The project should maintain the idea of a place from which to contemplate the modified landscape.
At the same time, we need to take possesion of the place in some way.
Answers:
The programme: The programme does not try to hide volumes by making a small, discrete building. A World Sustainability Centre requires a large building, or no building at all. Preliminary calculations indicate a building of some 12,000 square metres over the sea, and another 10,000 square metres below ground to house parked vehicles: the motor vehicle is currently the only means by which to arrive at the site. The entire building volume above ground we estimate to occupy some 138,000 cubic metres.
The site: The building is placed in the Ijsselmeer, which is the most artificial of the two planes of water. The Waddenzee, we consider as too delicate to build over, until large-scale macro-planning of the future Afluitdijk is not finalized. To build on top of the Aflsuitdijk would be to modify the directness of the monument. The desire is to make a place from which we can observe the surrounding landscape and the dike itself, so we need to be able to stand back from the dike and gain some height to be able to do this. At the same time, the views from the Afsluitdijk, should not be disturbed, nor should the line of the horizon be broken.
The World Sustainability Centre: The resulting building is a structure that reflects the surrounding landscape when necessary, but is capable of advertising itself when required. On a grey windy day, when the Afsluitdijk is at its quintessential best, the building reflects the water, the sky, and the horizon stays in its place. Parallax motion from the car indicates that there’s something there, but the volume is camouflaged. There will be days when there are two suns in the sky and days when you can’t see anything at all. Only as you flash by the building will its interior materialize briefly, then you have time to slow down and dive into the tunnel to have a look at the latest exhibition at the WSC Aflsuitdijk. There are times when the Centre will need to advertise itself, to be a bit louder, for instance every 500 days when the theme changes, and at these times the special membrane that encloses it will serve as a projection screen for the necessary contents. 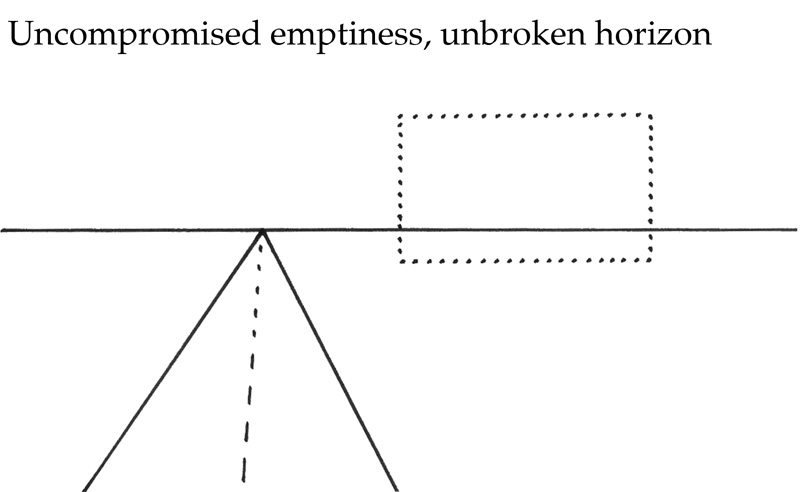 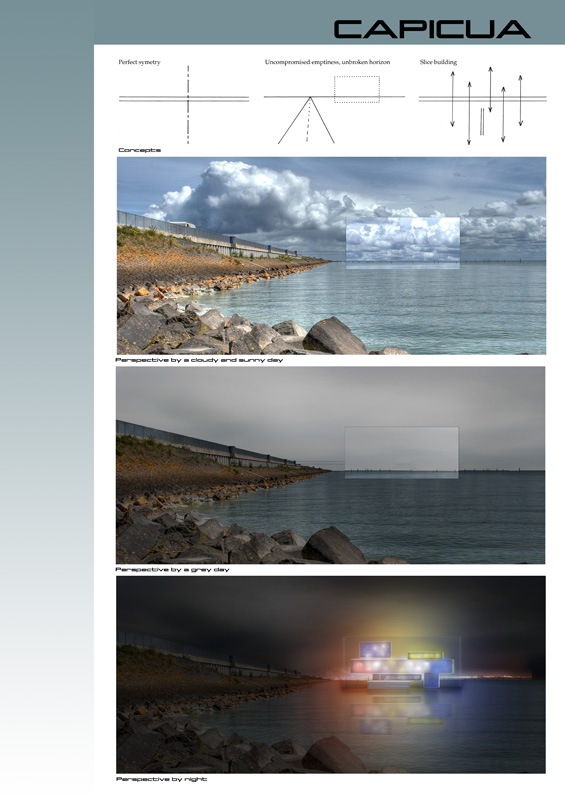 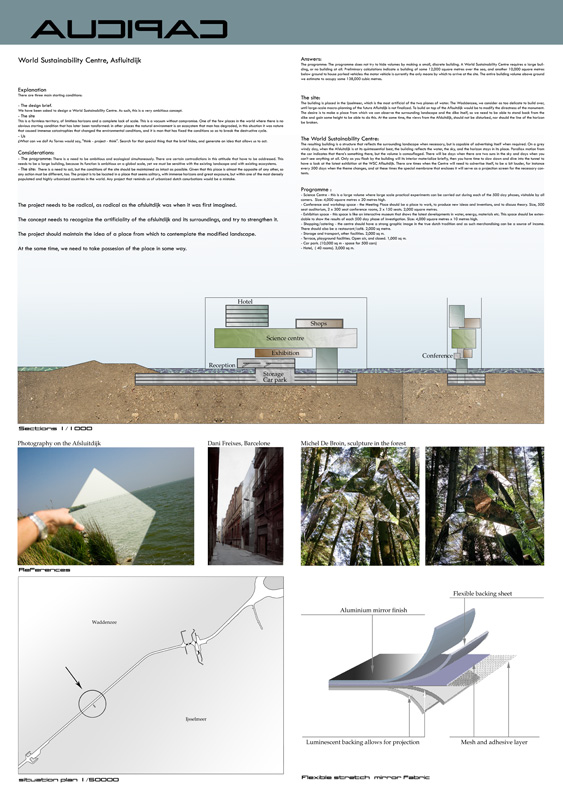 Want to chat about your project?
New projects